Home » About Us » Community Involvement

Celebrating 50 Years as a religious sister and even more as a medical technologist
August, 2019

Long before she was Sister Maria Grace or a medical technologist, Jeanne Quartiero was an eighth grader in Connecticut, and that is when she discovered an interest in medicine. She chose diseases as her themed essay topic and, as part of the assignment, mailed letters to healthcare organizations for information.

“I heard from all the laboratory associations, despite it being a fairly new field at that time,” she said.

This was in the mid-1950s and the role of the laboratory in clinical diagnosis and patient care was expanding at hospitals. From the mid-1950s through the 1960s, the capabilities of automated devices increased the number of laboratory tests that were being ordered, and medicine’s and surgery’s dependence on clinical chemistry was confirmed.

“Once I had all this information I never wanted to do anything else.”

From 1961 to 1965, she attended Marywood College in Scranton, Pa. She spent three years at the college and a fourth year at Robert Packer Hospital in Sayre, Pa., for the required internship to earn her bachelor’s degree in medical technology. She was hired by the hospital as a medical technologist where she worked for a year before making another change in her life.

Medical technology was not her only calling. She wished to enter religious life.

“Maybe I was being called by God. I wasn’t sure, but the longing stayed with me through college. The following year when I was working as a medical technologist at Robert Packer Hospital I listened to my heart,” she said.

Entering the Convent in 1966

“My parents were not happy about my decision at the time,” she said, “but as they came to know the sisters I was living with, they changed their minds. It was on Sept. 8, 1966, along with 49 other young women, that I became a postulant of the Congregation of the Sisters, Servants of the Immaculate Heart of Mary (IHM), in Scranton. I was one of the older girls in our group. Most were just out of high school, and these young postulants without college educations were directed toward degrees in education. The next three years of my novitiate – or training – took place at St. Joseph’s Hospital in Carbondale, Pa., where I continued to work in the laboratory. In 1969 I was officially hired by this hospital lab where I spent the next 12 years.”

By 1981, Sister Maria Grace wanted a change so she sent applications to laboratory job openings in Long Island, Pittsburgh, Scranton and Maryland. The church placed three criteria on her job search: it must be a Catholic hospital, she had to live in a convent and she needed to have access to public transportation.

“The congregation was not going to buy me a car!” she said. “The weekend after the Fourth of July holiday, I traveled to Maryland for an interview. It was so hot and all the girls were crowded into the one room at the convent with air conditioning. After a single sleepless night, I said I’m not coming here!”

A month later she learned about a job in Syracuse through a friend who was heading north to get her master’s in nursing from Syracuse University. St. Joseph’s Hospital hired Sister Maria Grace in 1981, where she worked until she joined Laboratory Alliance in its inception year, 1998.

The full-time medical technologist works in special chemistry at our Operations Center main laboratory. She operates the instruments that test for lead, celiac disease, lupus and more. During her early years in the lab, she attended conferences to learn about industry changes. Now she stays ahead of new technology through online training sessions. Sister Maria Grace continues to find the work interesting, challenging and meaningful.

“I would like to see more young people consider a career in medical technology,” she said. “It’s sad that our youth don’t know about the great opportunities in the lab.”

In the meantime, she says “I have no plans to retire – there’s no retiring when you work for the Church!”

Laboratory Alliance employees generously donated 75 swimsuits to the 5th Annual Swimsuit Drive sponsored by United Way of Central New York and the YMCA of Greater Syracuse. The drive, held during May 2017, will enable children to participate in the free water safety instruction program this summer. The goal is to prevent drowning, the second-leading cause of accidental death among children.

The Blood Banks Association of New York State (BBANYS) presented the award to Rivanera at its annual meeting on June 9 in Albany, N.Y. This award recognizes a BBANYS member in good standing who demonstrates leadership and/or innovation in transfusion medicine and has been a blood bank/transfusion professional for less than 10 years. 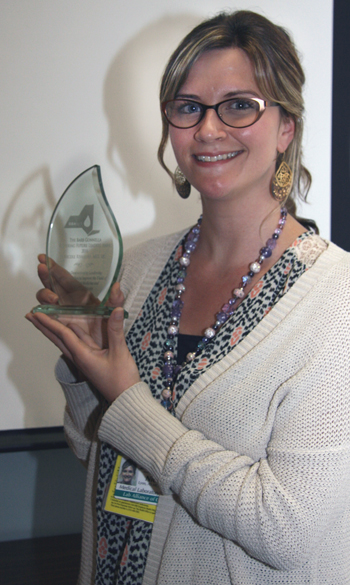 Rivanera joined Laboratory Alliance in June 2008 as a medical laboratory technician following her graduation from Broome Community College. She was licensed in February 2009. She is a member of BBANYS.

The award is named for Medical Technologist Barb Gonnella, who died in February 2013. She was the transfusion service manager of Laboratory Alliance since its inception in 1998. Gonnella was an active member of BBANYS and wore many hats in the organization, serving on the board, the newsletter committee and several annual planning committees.

The BBANYS award announcement describe Rivanera as “…a model employee. True to her caring nature, she is a mentor to her coworkers and is always willing to assist others.”

Laboratory Alliance’s Cathy Husted, technical supervisor of Transfusion Services at the RRL at Crouse Hospital, agrees. “Nicole is always looking for ways to improve laboratory processes. She puts the care of the patient first and foremost. Nicole is always courteous and professional and is a wonderful role model for all medical technologists. We are fortunate to have her.”

Donate A Swimsuit Campaign A Success

The program is run in conjunction with VolunteerCNY and the YMCA of Greater Syracuse in an effort to keep kids safe in the water by offering free water safety instruction to hundreds of children and their parents. Many of the children do not have appropriate swimwear when they are enrolled in the program. 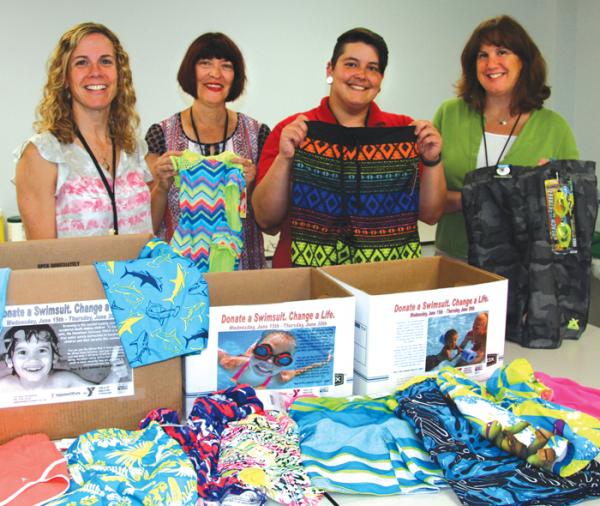 Gwen is pictured with Barb’s husband of 33 years, Severin Gonnella, and Josephine Przepiora, president of the College of Health Professions Alumni Association and a faculty member in SUNY Upstate Medical University’s Department of Clinical Laboratory Science.

The scholarship was established by Laboratory Alliance employees and friends in Barb’s name following her unexpected death in 2013. Barb was the transfusion services manager at Laboratory Alliance for 15 years and a graduate of the College of Health Related Professions at Upstate Medical University with a Bachelor of Science in medical technology. Contributions can be made to the scholarship in Barb’s name by mailing them to Upstate Medical University Foundation, 750 E. Adams St., CAB 326, Syracuse, NY 13210 or submitted online at www.foundationforupstate.org 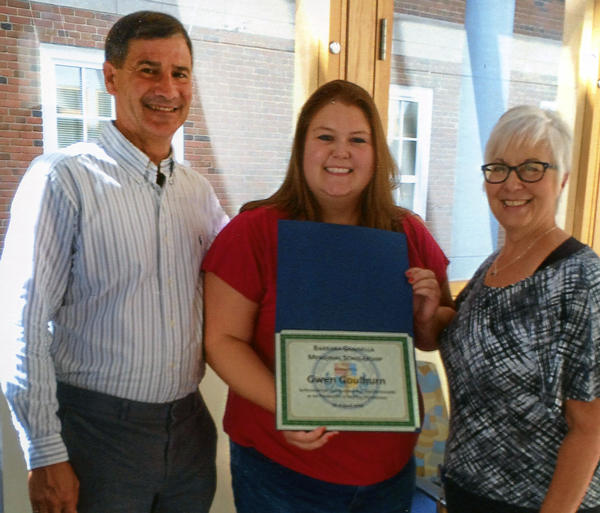 “The entire van was full!” said Marsha Herbst, human resource assistant, pictured right, after delivering food and other household items to Francis House on Sept. 24. Marsha and Bill Miller, transportation supervisor, made the delivery following a company-wide appeal at Laboratory Alliance. “When we got word that pantry donations are down at Francis House, Laboratory Alliance employees responded with gusto,” said Marsha. Francis House is a non-profit organization that operates solely on donations. Their mission is to provide a home and an extended family to people with terminal illnesses so they can die with dignity. To see a list of Francis House’s Wish List, visit francishouseny.org/wishlist.html 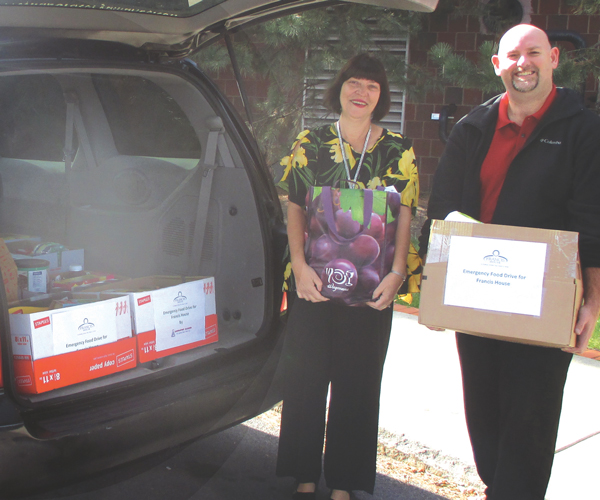 Hospice will host its 25th September Song charity event at 6 p.m. on Friday, Sept. 19, at Traditions at Erie Village. Money raised at the event enables Hospice to provide comprehensive quality care to patients and families, including medical care and emotional and spiritual support to patients confronting advanced illness and their families.

The public is invited to purchase tickets to the event by calling Hospice at 315-634-1100 or visiting their online ticket service. 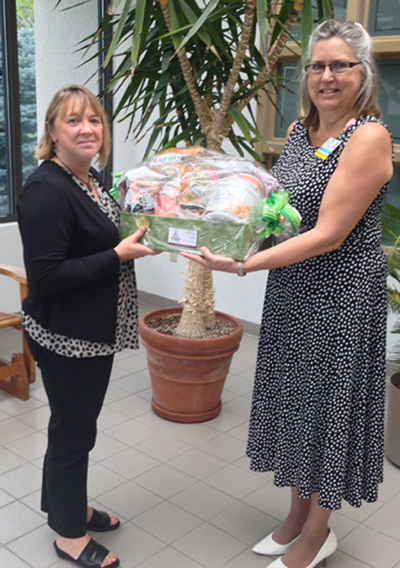 The Green Lakes Triathlon is the oldest continuous running triathlon in the United States and is a certified Livestrong event.

Walt Price also was the founding director of the Mountain Goat Run as well as the very successful Folksmarch walking club.

“I was glad for the opportunity to have Walt ride in the pace car with me,” said Mike. “He said that he never thought that his Mountain Goat run would have grown into thousands of people running through the streets of Syracuse, with prize money being offered to the winners.”

Mike also learned that Walt, while visiting his daughter in Germany, saw that communities would gather socially for fitness walks. When he came back to Syracuse, he decided to start a Folksmarch walking club here.

Walt Price came to Syracuse in 1955 to take the Regional YMCA directors position. Though he has turned over the director’s position to Chris Read for the Triathlon, he is still active in the planning as well as his Folksmarch program and other programs at the YMCA.

This is the second year that Laboratory Alliance has provided the car and Mike has volunteered his time for the event. 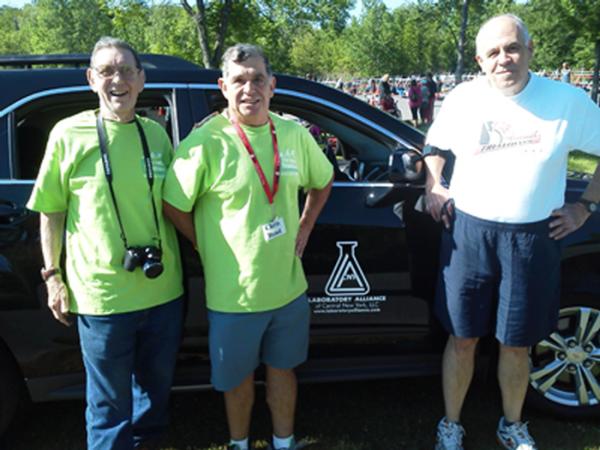 Swimsuits Collected for UW Save A Life campaign

Nearly 50 children’s swimsuits donated by Laboratory Alliance employees were delivered to United Way by Transportation Supervisor Bill Miller. United Way’s 2014 Donate a Swimsuit – Save A Life campaign makes it possible for many of the youth of Onondaga County to enjoy a fun and safe summer.  — May 30 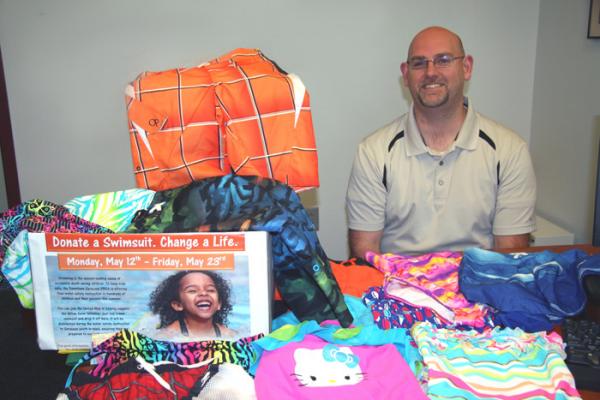 Hospice of CNY thanks Laboratory Alliance

Laboratory Alliance employees raised more than $5,000 for the American Heart Association this winter and 25 employees, plus their families and friends, participated in the Heart Walk/Run on behalf of the company. The 2014 Heart Walk was held on March 22 at Onondaga Community College. This is the second year the company has recognized a colleague who died in 2013 by wearing t-shirts marked with “In Memory of Barb Gonnella” in a heart on the backside. — April 10 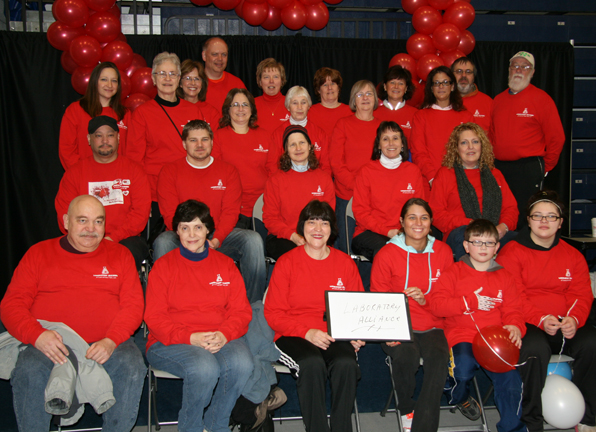 Soccer team takes the Laboratory Alliance logo 'all the way'

The Lab Crew, led by Dr. Rachel Elder of Pathology Associates, (bottom row, far right) were the Fall 2013 soccer league champions. Their longtime commitment to soccer, and to sporting the Laboratory Alliance logo, earned the team new t-shirts to kick off the 2014 season. The women play on Sunday evenings at Sport Center 481 in East Syracuse. — March 1 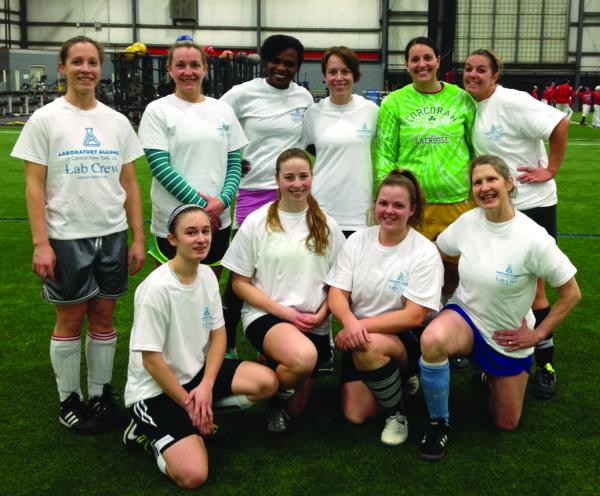